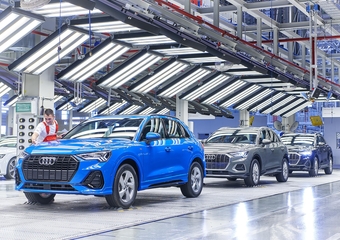 Győr, 11 January 2019 – Audi Hungaria closed out 2018 with solid production figures. Last year, our company celebrated its 25-year anniversary and hit major milestones, marking a new era for Audi Hungaria with the launch of the series production of Audi Q3, the first SUV produced at Győr, and the production of electric motors revving up. At the end of last year, Audi Hungaria had a 13,084-strong workforce, the highest number of employees in the history of our company.

“We successfully managed to overcome the many challenges we faced throughout last year and lay the groundwork for a stable future. With the knowledge and experience we accumulated over the last 25 years and the performance of our team, we are looking forward to the next 25 years with optimism”, said Achim Heinfling, Chairman of the Board of AUDI HUNGARIA Zrt. “We are counting on the work of our employees to continue writing the success story of Audi Hungaria together.”

In addition to electric drives, the company is consistently working on improving internal combustion engines. This is proven by the fact that the engine production range was expanded last year to include three-cylinder petrol engines and a newly developed four-cylinder diesel engine with mild-hybrid technology.

In 2018, Audi Hungaria produced six different types of petrol engines and three different types of diesel engines, ranging from 63 kW (86 hp) to 470 kW (639 hp). 6,000 employees of the company produce 8,800 engines every day for 31 vehicle manufacturing sites of the Volkswagen Group.

The models manufactured by Audi Hungaria are shipped to over 90 countries in the world. Four-Ring cars produced in Győr were the most popular in Germany, the UK, the USA and Canada in 2018.

The company keeps up its momentum in 2019 as well: with Audi Q3 manufacturing revving up, now its time to launch the production of another Q model in Győr.