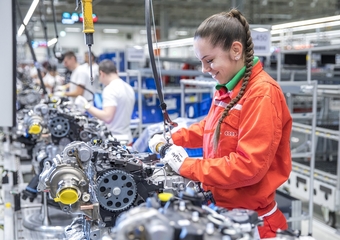 • With the series production of the Audi Q3 and the electric engines Audi’s product palette has further widened.
• 2019 will bring the second SUV, the Audi Q3 Sportback to Győr
• Achim Heinfling: “A solid base to build our future on”

(the 2017 turnover was €7,550 million*). At the end of the previous year Audi Hungaria boasted a workforce of 13,084 (as opposed to 12,307 at the end of 2017). The current year will see the start of the series production of the Audi Q3 Sportback, the second SUV model, further consolidating the position of the Hungarian production plant.

“2018 was an anniversary year for us, and one that brought us past remarkable milestones. The production of electric powertrains brought Audi Hungaria, in the company’s 25th year of operation, to the era of electromobility. 2018 also saw the start of the series production of the Audi Q3, the first ever SUV model produced in the Győr plant. These two projects provide a solid base to build our future on” – Managing Director of AUDI HUNGARIA Zrt. Achim Heinfling assessed the company’s past year. “True, we also had many a challenge – the fluctuations in the production caused by the switch to the WLTP standard is a good example – which took a lot of our time and energy. Taking all the above in consideration we can say that in 2018 the company maintained a sound production volume with good financial results. The competition is heating up in the segment which will go on presenting challenges for us in 2019: we will have to introduce efficiency and savings measures in order to maintain the competitiveness of Audi Hungaria.

In 2018 Audi Hungaria produced a turnover of €7,377 million*. The company used her 2018 investments to start up the new engine types and start the production of the electric engines and the Audi Q3.

The past year saw Audi Hungaria produce a total of 1,954,301 engine units, 9,453 of which were electric engines. The engine product palette produced here now includes the 3-cylinder Otto engines and the mild hybrid 4-cylinder Diesel engines. Our daily engine production reached 9,000, including alternative powertrain solutions for 31 production plants for the Volkswagen Group.

As for vehicle production, last year we produced 100,000 vehicles. Last year also saw the facelift of the Audi TT. In production at Audi Hungary for over 20 years the dynamic design of the compact sports car is now further enhanced by sporty design features. In the summer of 2018 a new model range arrived in Győr with Audi Q3, the first ever SUV to be produced here – and it was off to a flying start, as in that year a total of 15,657 cars rolling off the production line. The vehicles produced by Audi Hungaria are sold in over 90 countries around the world, with the main markets being Germany, Great Britain, the USA and Canada.