It’s good to give: For the sixth time, Audi employees have done voluntary work in 30 institutions in the region

It’s good to give: For the sixth time, Audi employees have done voluntary work in 30 institutions in the region 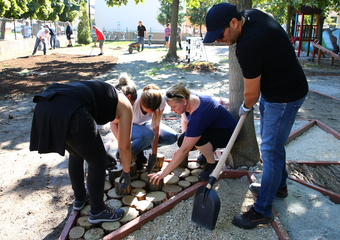 • Almost 600 employees did voluntary work in 30 institutions
• In connection with the “Audi helps” campaign, this year for the first time institutions could apply for special support from Audi Hungaria
• Dr. Erzsébet Knáb, the member of the Audi Hungaria management board responsible for personnel matters and organisation: “Social responsibility is an important core value for our company, which can materialise from year to year with the unselfish help of our employees”


Győr,  21 September 2019. - For the sixth year running, AUDI HUNGARIA Zrt. employees initiated social projects in the region on a voluntary basis, of which 23 were implemented. In an unusual campaign this year, institutions in the region could also apply for special support. Thus aid initiatives were implemented in seven locations, at the centre of which was sustainability. Institutions in Győr and its vicinity were renewed this year with the dedicated involvement of more than 600 Audi employees.

“Our Volunteers’ Day provides a great opportunity for implementing initiatives proposed by our employees and for offering responsible help. The unselfish and dedicated work over recent years has meant value creation in around 160 institutions. Our employees are happy to propose the locations, and they work with enthusiasm on the volunteer projects”, said Dr. Erzsébet Knáb, the member of the AUDI HUNGARIA Zrt. management board responsible for personnel matters and organisation.

The “Audi helps” campaign was launched this year too, in connection with which the dreams of seven institutions and civil organisations in the region could come true in the fields of education, environmental and nature protection, as well as social supply. The winning projects were implemented by members of the company management, representing one of the company’s important core values, social responsibility. “If anyone has the opportunity to help others, they have the moral responsibility to do so. In my experience, very many of our colleagues identify with this thought, and sense the power of joint action”, added Dr. Erzsébet Knáb.

This year too, Audi employees grasped shovels, spades and brushes in the interest of numerous good causes. Thus among other things an outdoor social space was established in the Forrás Waldorf School in Győr, bird’s haunts were made at the Esterházy bird reserve, and the paediatrician’s surgery was renovated in Győr-Ménfőcsanak. Modernisation work was carried out by volunteers in the yard of the Bágyogszovát Day Care Nursery school, and raised flower beds were laid out in the Győrújbarát Pitypang Nursery School. Audi employees also worked on renovations in the inner courtyard of the Kálóczy Square Old People’s Home and Apor Vilmos Catholic School in Győr, and in Fenyőfő they built an insect hotel and planted fruit trees.

In the “Audi helps” scheme, among other things the inner spaces of the Dr. Piróth Endre Social Centre in Táplánypuszta were renovated, and an interactive equestrian study path was established for healthy children and those living with disability in the Daniló Sports Association’s riding school in Mosonmagyaróvár. Inside and outside modernisation work was carried out in the Hungarian Malta Charity Service’s Providence House Daycare Home for the Disabled, and a rest area with wheelchair access was established in the courtyard. Under the motto “Let’s play together, let’s dance together!”, the community dance area has been renewed in the St’ART House in Győrszentiván, and an outdoor schoolroom and training area has been established in Gárdonyi Géza Primary School in Győr.

This year, the company supported institutions in the region with around HUF 55 million through the voluntary projects.