Audi Hungaria: From 1 October Alfons Dintner is the new chairman of the board

Audi Hungaria: From 1 October Alfons Dintner is the new chairman of the board 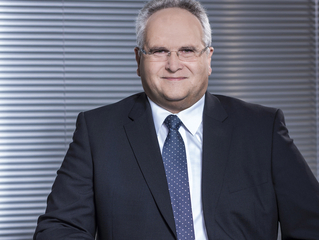 Győr, 26 September 2019. - On 1 October, Alfons Dintner takes over the position of chairman of the Audi Hungaria board of directors from Achim Heinfling, who will head the AUDI AG Ingolstadt centre. Alfons Dintner comes to Győr from Ingolstadt, where he was responsible for directing the AUDI AG pre-production centre.

“In the course of my career I have been active in various manufacturing sites of the Volkswagen Concern, and I have always looked for new challenges. So I am really looking forward to my new duties as chairman of the Audi Hungaria board of directors”, said Alfons Dintner. “It is a high priority for me that besides the company, I also get to know my colleagues, the city of Győr, and Hungary. Audi Hungaria is a key pillar of the concern, and I will work on further strengthening this position in the future.”

Alfons Dintner was born in Hepberg, Bavaria in 1963. After acquiring the profession of locksmith and studying precision engineering in Munich College, he began his professional career with AUDI AG in Ingolstadt in 1987. In 1998, Dintner took over the management of Audi TT lacquering, then in 2001 he became responsible for all lacquering in the Ingolstadt plant. Besides his functions in AUDI AG, during this period he also fulfilled various planning and consultation duties within the Volkswagen Concern, in the SEAT, Volkswagen South Africa, Bentley, Lamborghini and FAW Volkswagen companies, among others. He changed over to Brussels in 2007, where he took over both the plant management and spokesman’s duties at Audi Brussels. Here Dintner and his team were responsible for Audi A1 production taking off.

In 2011 he became the member of the Volkswagen de México board responsible for production, where with his team he had success with the production take-off of various models. Beside this, under his leadership the Silao engine works was opened, the concern’s second manufacturing site in Mexico. In 2014 he was appointed as managing director of AUDI MÉXICO S.A. de C.V. In this position he was responsible for the erection of the first Audi plant in Mexico, as well as the launch of production of the Audi Q5 new generation. He returned to Ingolstadt in 2019, where he headed the AUDI AG pre-production centre.