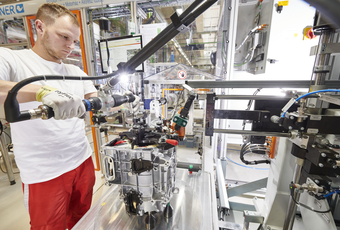 • Ratio of e-engines in production rising
• As Chairperson of the Management Board Alfons Dintner said: “Audi Hungaria is speeding into the future with electric drive”

Győr, 19 December 2019 - A mere year and a half after the start of serial production, Audi Hungaria staff have produced the 100,000th e-engine. The company’s Győr plant has been manufacturing electric drives since July 2018. Győr supplies these electric engines for Audi’s first all-electric model, the Audi e-tron Sportback.The capacity for e-engine production was expanded step by step, and as a result today the Győr unit turns out more than 700 electric engines per day.

“Audi Hungaria greatly contributes to implementing Audi’s electric offensive. We are putting in intense effort to expand our e-competences. In 2018, we successfully launched the serial production of electric drives and in addition, with the increase in production of the mild-hybrid models of the Q3 segment, as of 2019 our company also produces electric-powered vehicles. We are preparing for the integration of the next generation of electric drives with the e-transformation project already in place," said Alfons Dintner, Chairperson of AUDI HUNGARIA Zrt.’s Management Board.

There are currently two different e-engines produced at the company, with three output types: 100 kW, 125 kW and 140 kW. All e-tron models are powered by two electric motors, one on the front and another on the rear axle. With the expansion of production, daily capacity jumped from 400 to 720 units a day. New production equipment has been installed on both the production line and the modular production units. Staff numbers have also increased: electric drives are today produced by 490 experts in Győr.

Audi Hungaria is the central production site of electric drives within Audi Group. Through its e-transformation project, the company continues to develop its competences, and is building additional, further expertise.