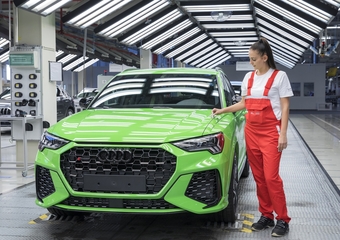 • Close to two million engines produced, including more 90,000 e-engines
• More than 160,000 vehicles manufactured
• Alfons Dintner, Chairman of the Management Board of Audi Hungaria:
“This result is a great starting point in terms of the future”

Győr, 15 January 2020 – Despite numerous challenges during the year, Audi Hungaria ended 2019 with outstanding production results: More vehicles rolled off the production line in Győr than ever before. In addition, a year and a half after the start of serial production, the company has already produced more than 90,000 e-engines. 2019 also saw the start of the serial production of electric-drive Q3 models. Audi Hungaria continues to be the region's largest employer, with a staff of 12,807 as at the end of the year.

"I am extremely proud of the company's performance, and would like to take this opportunity to thank each and every staff member. We have once again proved that Audi Hungaria is capable of excellent performance. The transformation process marked by digitalisation, electromobility and sustainability is posing numerous challenges. Our priority for the future is to continue increasing productivity, thereby strengthening competitiveness. This will allow us to go on providing stable and secure jobs for our employees”, said Alfons Dintner, Chairman of the Management Board of Audi Hungaria.

The figures of engine production in detailed breakdown: the company produced 99,789 3-cylinder and 983,893 4-cylinder Otto engines, among them the 2.0-litre 4-cylinder petrol engine, voted "International Engine of the Year”. In addition, Audi Hungaria produced 331,727 4-cylinder diesel engines. A total of 14,927 units were made of the legendary five 5-cylinder Otto engine.

The company has also been manufacturing electric engines since 2018, with their ratio increasing considerably in the past year. There were total of 90,367 e-engines produced in Győr in 2019.

In terms of vehicle manufacturing, the company achieved its highest production volume to date, with a total of 164,817 Audi models rolling off the production line in 2019. The model manufactured in the highest numbers was the Audi Q3, with 120,230 units completed. In respect of Audi TT models, the company produced 11,791 Coupés and 3,208 Roadsters. In 2019, 7,302 Audi A3 Cabriolets left the production hall, along with 6,986 A3 Limousines, which the company has been producing in collaboration with Ingolstadt since March. Serial production of the Audi Q3 Sportback was started in the summer, with 15,300 units finished of the newest Győr model by the end of the year.