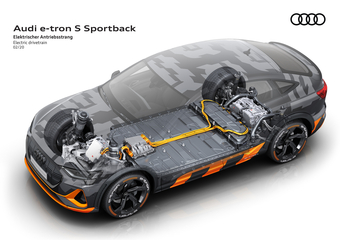 Győr, June 18. 2020 – The series production of the new generation of electric engines, the performance engine families has started at Audi Hungaria. The new engines are produced for the Audi e-tron S-models which were presented in March.

„The electric drive performance engine family takes the driving dynamics of the sporty e-tron S-models to a new level, which are driven uniquely by three engines produced in Győr. I am proud of our dedicated staff of the project, who prepared the start of production with exemplary teamwork and flexibility in these challenging times, “ said Thoralf Hanschel, Member of Board of Management for Engine Production at Audi Hungaria.

The S version of the Audi e-tron and Audi e-tron Sportback models is driven by three electric engines produced in Győr, two of which are on the rear axle. The total performance of the resources is 320 kilowatt, which can reach even 370 kilowatt in boost mode and a maximal torque of 973 Nm can be available for the driver. As a result, both electric-driven models accelerate from a standstill to 100 km/h in 4,5 seconds. Intelligent drive control takes not only driving safety, but also driving dynamics to a new level, as the rear wheels can be driven independently. Electric all-wheel drive is coupled with electric torque vectoring with active and fully variable torque distribution on the rear axle.

Despite the epidemiological measures, the launch of series production was achieved by the set deadline, thanks to the flexibility of the staff to adapt to the new situation.

Audi Hungaria has been producing electric drives for the Audi e-tron, the first all-electric model of the Audi brand since 2018. More than 100,000 e-engines have already been produced in Győr.