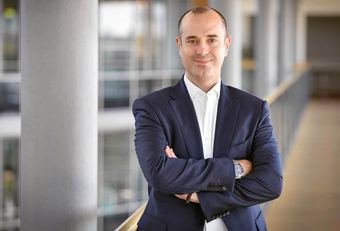 Győr, July 1, 2020 - As of today, Dr. Patrick Heinecke will take over the leadership of Finance, IT, Procurement and Compliance at Audi Hungaria from Axel Schifferer. The business administration graduate moved from the headquarters of AUDI AG to Győr. In Ingolstadt, he was Head of Controlling for Strategy, Planning and Steering of the Audi Group. His predecessor Axel Schifferer is retiring at his own request after 30 years with the Volkswagen Group, including eight years as CFO of AUDI HUNGARIA Zrt.

"Financial stability is extremely important, especially in these turbulent times. Dr. Patrick Heinecke, the new Member of Board of Management for Finance, IT, Procurement and Compliance at Audi Hungaria, will support us in this endeavour with all his might. He is an expert on the VW Group companies and has already gained valuable experience in numerous specialist areas. We will continue to write the successful history of Audi Hungaria with him," says Alfons Dintner, Chairman of the Board of Management of AUDI HUNGARIA Zrt.

The new CFO, Dr. Patrick Heinecke, born in Seeheim-Jugenheim in 1977, studied business administration at the European Business School in Germany. He joined the Volkswagen Group as an international trainee in 2003 and started his career in 2004 in the department of Accounting in Wolfsburg. Between 2006 and 2009, he was assistant to the Board of Management for Finance and Controlling of the Volkswagen Group. From 2010, he was Head of Group Controlling Audi, Seat, Porsche, Scania, MAN and Overseas in Wolfsburg. In 2013, he changed to AUDI AG in Ingolstadt, where he has since been Head of Controlling Strategy, Planning and Controlling for the Audi Group. From July 1, Dr. Patrick Heinecke has been the Member of the Board of Management for Finance, IT, Procurement and Compliance at AUDI HUNGARIA Zrt.

"With Axel Schifferer, a valued colleague and excellent financial professional is leaving the company after many years," adds Alfons Dintner. "Under his leadership as Chief Financial Officer, Audi Hungaria was restructured and converted into a closed joint stock company. Compliance and integrity were implemented as important pillars of sustainable corporate management and, with geothermal energy, the company changed to renewable energy early on. He further expanded the procurement and IT services for the VW Group and pushed ahead with the digitalisation of corporate processes at the Hungarian location. I wish him all the best for the next stage of his life".

Dr. Patrick Heinecke earned his doctorate at the University of Erlangen-Nuremberg on the success factors of regional strategies. He speaks six languages: in addition to German, his native language, English, French, Spanish, Italian and Portuguese. In his free time, he enjoys sports such as cycling and jogging. He is married and has two children.