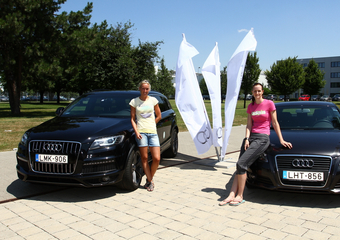 From the next season on, the Norwegian Katrine Lunde Haraldsen is going to keep the goal of the women’s handball team Győri Audi ETO KC. The Olympic Champion and multiple Champions League winner goalkeeper received her Audi Q7 today from Dr Johannes Roscheck, Director of Finance at AUDI HUNGARIA MOTOR Kft. The company as the team’s name-giving sponsor puts the car equipped with a six-cylinder, 3.0-litre Common Rail diesel engine manufactured in Győr at the player’s disposal.

“Handball with its team spirit and its play requiring strategic thinking is an excellent medium for conveying the values Audi Hungaria represents. I am convinced that the two new players are going to contribute greatly to the performance and growth of the team in the future,” stressed Dr Johannes Roscheck, Director of Finance at Audi Hungaria.

“I am glad that I can continue my career in this beautiful city, as part of an excellent team, and with the support of a strong sponsor. The framework conditions ensured by the club and the supporter provide an outstanding basis for reaching superb results,” said Lunde when accepting the car.

The Orca Black Audi Q7 equipped with many extras and with a performance of 176 kW/ 240 hp is powered by a six-cylinder engine that represents the world’s cleanest diesel technology and already meets the Euro-6 emission standards prescribed for 2014.

On this same day Ana Gros, ETO KC’s new back transferred from Slovenia, also received her Audi A3 Sportback. The 19-year-old player is going to strengthen the team starting next season for at least two years.
In addition to the cars given today, Audi Hungaria provides the club with 12 vehicles. The other goalkeeper of the team, Katalin Pálinger, drives an Audi S5, while the captain, Anita Görbicz, drives an Audi A6 Allroad.

AUDI HUNGARIA MOTOR Kft has been the name-giving sponsor of Hungary’s best women’s handball team since 2006. The once-extended sponsorship contract is valid until the summer of 2012.