Audi Hungaria School: The New Building of the New Institute was Inaugurated

Audi Hungaria School: The New Building of the New Institute was Inaugurated 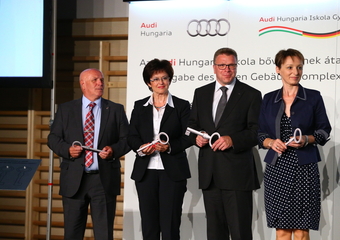 • Pupils could take the new school complex in their possession in September.
• Thomas Sigi, Labor Director and Member of the Board of Management of AUDI AG with responsibility for Human Resources: “With the Audi Hungaria School we can support education right from childhood.
• Dr. Elisabeth Knab, Member of the Board of Management for Human Resources of Audi Hungaria: “This institute can become one of the most modern schools in Hungary”.

22 September 2015, Győr—By inaugurating the new school buildings in time, the expansion of the Audi Hungaria School in Győr reached a new milestone:453 pupils could start the new school year. By 2017, a new, modern school centre will be built in Győr, where 650 pupils can learn in the future. The project is supported by the Audi Hungaria School Foundation for Operating and Maintaining Institutes, but will be implemented through the financial support from AUDI HUNGARIA MOTOR Kft. for the greatest part. The construction project is also supported by the Hungarian government and the city of Győr. The latter contributes to the success of the project by infrastructural investments that will be implemented in the direct surroundings of the school.

“Audi Hungaria is the world’s biggest engine factory and one of the most modern vehicle production plants within the concern. In the spirit of our motto ‘Progress through Technology’, supporting young people from early childhood, the beginning of primary school education is of high priority for us”, Prof. h.c. Thomas Sigi, Board Member for Human Resources and Labor Relations Director of AUDI AG said. “By establishing the Audi Hungaria School we have made a significant step towards this goal.”

“One of the key pillars of our corporate human resources strategy is supporting the education of future generations, which begins in childhood. That’s why the expansion of the Audi Hungaria School is so important for us. The new complex will enable this institute to become one of the most modern schools in Hungary”, Dr. Elisabeth Knab, Member of the Board of Management for Human Resources of Audi Hungaria said. “With its excellent, multi-lingual education programme, the Audi Hungaria School also contributes to making our site more attractive. After all, the whole region can profit from education opportunities of the highest standards.”

In the first stage, 2,000 square meters of school buildings were refurbished and new educational and sports facilities were built on a total area of 4,400 square meters. Part of the old building was demolished and the main building was refurbished and expanded. Furthermore, a multi-function gymnastics hall and a new canteen will be at the pupils’ disposal. The latter will be equipped with a school kitchen and a total capacity to serve 800 people. As the result of the full expansion, 44 educational facilities will serve the pupils, occupying a total area of 9,600 square meters.

Being a foreign school that is acknowledged in Germany, the Audi Hungaria School is a member of the network of 142 foreign German schools since 2013. The educational concept of the institute makes it possible for Hungarian as well as German students to acquire both Hungarian and German certificates.

The Audi Hungaria School was launched in Győr in 2010, with 3 classes and 58 students, and is being expanded on an ongoing basis ever since. The institute will be expanded to cover 12 school years (up to high-school graduation), which will be finished in the school year 2017/18.