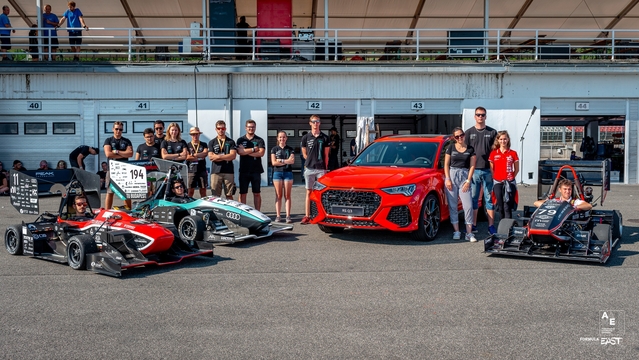 11 August 2021, Győr – Audi Hungaria supported four Hungarian teams in the domestic round of the international Formula Student construction competition: these were the Arrabona Racing Team, the SZEngine team, the BME Formula Racing Team and, the BME Motorsport team. The international participants competing at Hungaroring, Mogyoród, belonged to 71 teams from 21 countries. The annual event provides an opportunity for engineering students from the Central and Eastern European region to compete against the world's best Formula Student teams.

"Audi Hungaria is committed to educating the next generations, and we are dedicated to supporting talents. Extensive scientific collaborations are vitally important for us; this principle is a definitive element of our human resources strategy. The Formula Student movement is an excellent opportunity for discovering and embracing talents who may later grow into future professionals. It also provides a chance to introduce our company to young people early on and to engage them in real-life projects", said Kinga Németh, Audi Hungaria's Board of Management for Human Resources and organization.

The aim of the Formula Student competition is to test teams both in terms of the performance of their cars in competitive conditions and also in terms of presenting their engineering work, their cost and production plan, and business plan to industry professionals. The judges comprise several Hungarian and international experts, including some of Audi Hungaria’s engineers. This interactive environment provides an excellent opportunity for both engineering students and industry professionals to build international relationships. This year's Formula Student East construction race was held between 7 and 11 August at the Hungaroring racing track. 71 teams from 21 European countries participated in the competition. Nearly 2,000 students pitted their skills against each other in the categories of internal combustion vehicles, electric vehicles, and self-driving vehicles.

"We are very happy that the Formula Student East race was held again in 2021, and what is even better is that it was hosted at a new venue this time, —the Hungaroring. This is a huge opportunity for us. We are grateful to Audi Hungaria, who have stood by us and supported us for the past seven years," said Regina Sebestyén, team captain of Arrabona Racing Team. There is close collaboration between the university teams from Győr, as Arrabona Racing Team's car features the custom-developed engine of the SZEngine Engine Development Team, also supported by Audi Hungaria. "The team is competing in the internal combustion vehicle category. This year we have made a lot of improvements to our ART_08 vehicle: we have replaced the steel tube frame by a carbon fibre monocoque, the car got a completely new aerodynamic package and a new power unit developed by SZEngine," added Regina Sebestyén.

Extensive collaboration with universities is key for Audi Hungaria, part of which is supporting young engineering talents, thus facilitating their further development. After being on the team, members of Formula Student teams often continue their professional careers in the company's internship program. Since we have been supporting Formula Student teams, many competitors have become colleagues at our automotive corporation.