The story of Audi Hungaria 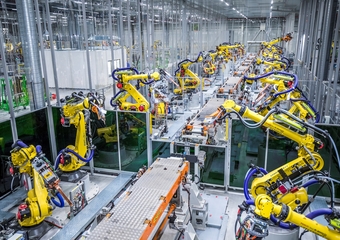 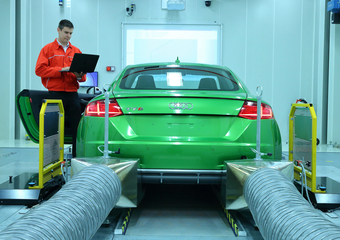 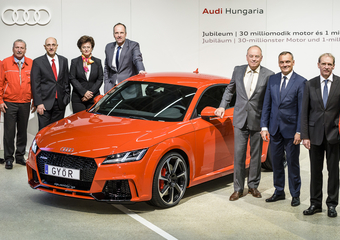 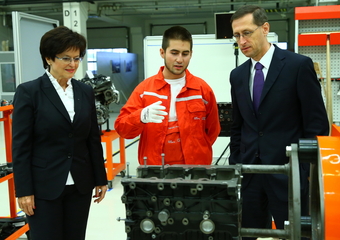 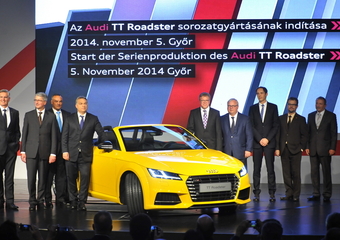 Start of Production of the V6 TDI crankshaft in the enhanced work shop G20. AUDI HUNGARIA MOTOR Kft. won the prize for professional training of the German-Hungarian Chamber of Industry and Commerce (DUIHK). The new Audi TT celebrates its world premiere at the Geneva Motor Show. The third generation of the Audi TT will be completely produced in the new car factory of Audi Hungaria. AUDI HUNGARIA MOTOR Kft. is again the “most attractive employer” of Hungary. This is the sixth time in a row that the company is at the top of the list. Start of production of the Lamborghini Huracán for which the skin panels are produced in the toolshop Győr. First cut of the spade for the new logistics building of the toolshop. Audi presents the new 3.0 V6 TDI engine produced in Győr at the International Vienna Engine Symposium. Audi Arena Győr multifunctional hall ceremoniously inaugurated. Topping-out ceremony for the extension of the Technical Development. The extension of the airport in Pér has been completed: Greater flight safety with Instrumental Landing System and longer runway. By the end of 2015 AUDI HUNGARIA MOTOR Kft. will be using heat energy produced by a future-oriented geothermal system. In the framework of the new project the company has concluded a 17+15 year energy supply contract with DD Energy Kft., a subsidiary of PannErgy Nyrt. Representatives of the AUDI Group and Audi Hungaria laid the foundation stone for the expansion of the Audi Hungaria School in Győr. Start of series production of the new Audi TT Coupé. 11,000th employee at AUDI HUNGARIA MOTOR Kft. 100,000 cars already produced in the new automobile factory. Honorary doctorate for Audi Hungaria Chairman of the Board of Management, Thomas Faustmann. High-Tech lab inaugurated at the Széchenyi István University in Győr with Audi Hungaria. Audi TT Roadster from Győr in Paris. First Audi Hungaria Volunteer Day in Győr. Győr Ballet Company Turns 35 – Audi Hungaria Presents Award for Excellence in Dance. Start of Production of the new Audi TT Roadster. Audi Arena Győr opened its gates. Audi Hungaria starts fifth department at Széchenyi István University. Audi Hungaria supports hospital modernisation. 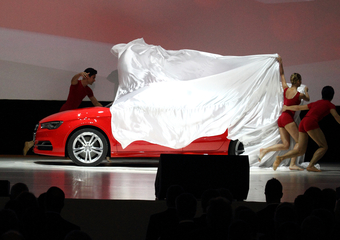 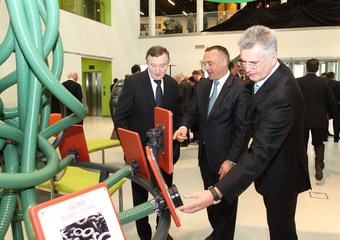 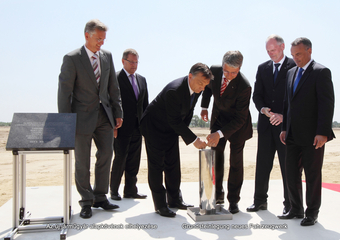 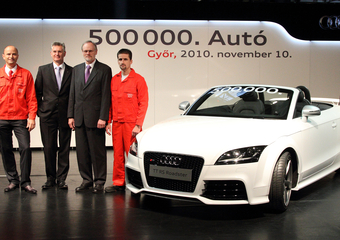 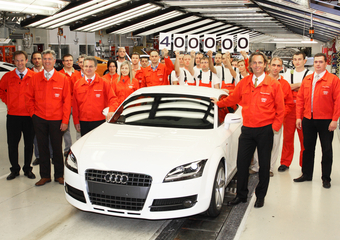 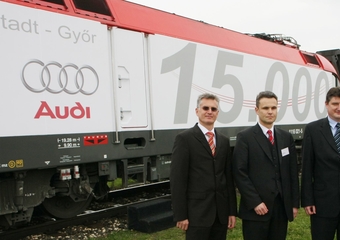 The 15,000th block train between Győr and Ingolstadt arrives to the manufacturing site of AUDI HUNGARIA MOTOR Kft.. Audi Hungaria celebrates its 15th Anniversary. The 400,000th car leaves the assembly line in Győr. 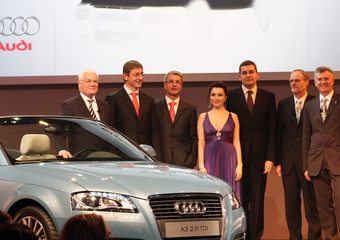 A new chapter is opened in the success story of Audi Hungaria by the production of Audi A3 Cabriolet. Prime Minister Ferenc Gyurcsány and Rupert Stadler, the President of the Board of Directors of Audi AG starts serial production in the vehicle factory of AUDI HUNGARIA MOTOR Kft in Győr. 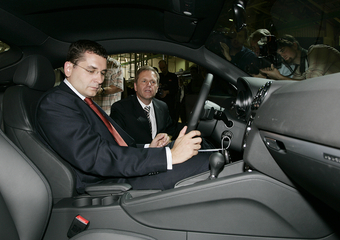 In June, the serial production of the second generation of the sports cars TT Coupé is started. The first car is driven off the production line in Győr by János Kóka, Minister of Economy and Transport. 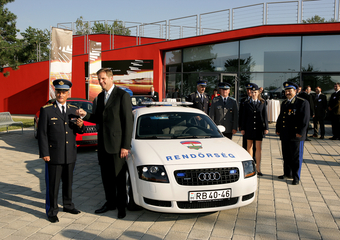 In June 2005, the ten millionth engine is completed by Audi Hungaria. The jubilee power unit is installed into an Audi TT Coupé produced for the police. The vehicle with special equipment is handed over by Dr. Jochem Heizmann, a member of the Board of Directors of Audi AG to Dr. László Bene National Chief Commissioner of Police. Audi expands its scope of activities in Hungary; the tool factory of Audi Hungaria is inaugurated in the presence of Ferenc Gyurcsány. 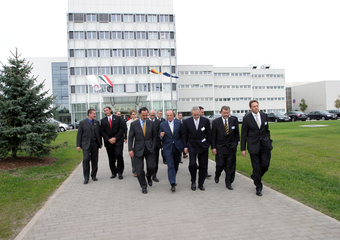 The10th anniversary of AUDI HUNGARIA MOTOR Kft on 24 September 2003, in the presence of Prime Minister Péter Medgyessy and Dr. Bern Pischetsrieder, the President of Volkswagen AG. The anniversary is celebrated, among other things, by organizing an "Open Day". 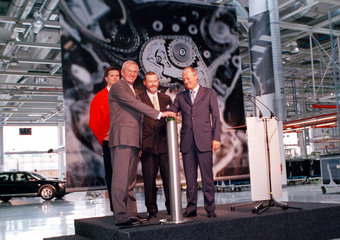 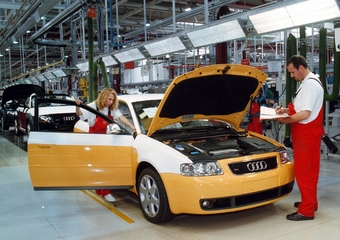 The Engine Development Centre of Audi Hungaria is opened in 2001. The engineers carry out development work in support of serial production in the centre, not only for Audi Hungaria, but also commissioned by the mother company Audi AG. The beginning of Audi A3 and S3 production in Győr. These models are produced until 2003 by Audi Hungaria. 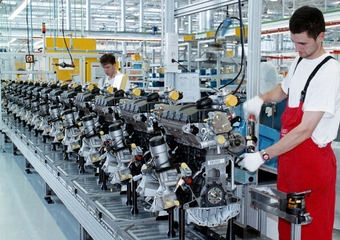 Opening of the manufacturing hall for the four-cylinder diesel engines in the presence of Prime Minister Viktor Orbán, József Balogh, the Mayor of Győr city, Finance Minister Mihály Varga and Jürgen D. Hoffmann, the Director of Audi Hungaria responsible for finance. 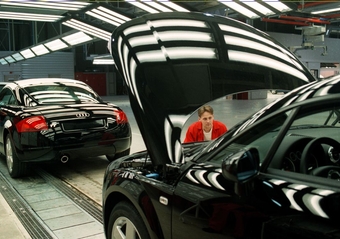 The assembly of TT Coupé is started in Győr. Accurate handwork for the perfect quality. 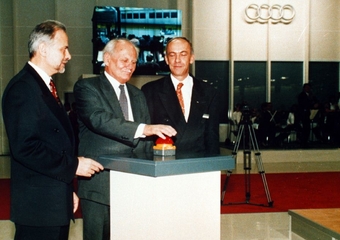 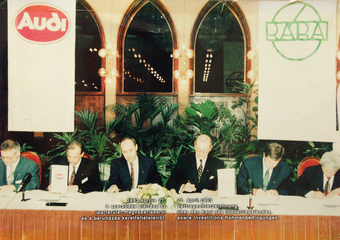 The signature of the agreement on purchasing the industrial site and the general conditions of the investment project. Erected hall structure with green field, original condition.